If youve been using Subversion, Mercurial is going to be confusing. This tutorial covers the biggest differences in how Mercurial works. If you've never used Subversion, just skip ahead.

When the programmers at my company decided to switch from Subversion to Mercurial, boy was I confused.

First, I came up with all kinds of stupid reasons why we shouldn't switch. “We have to keep the repository on a central server, so it will be safe,” I said. You know what? I was wrong. In Mercurial every developer has a copy of the entire repository on their hard drive. It's actually safer. And anyway, almost every Mercurial team uses a central repository, too, which you can back up compulsively, and you can build a three-ringed security zone complete with layers of Cylons, Stormtroopers, and adorable labradoodles (or whatever your IT department requires).

“The trouble with distributed version control is that it makes it too easy to branch,” I said, “and branching always causes problems.” Turns out this was wrong, too. I was on a streak. Branching causes problems in Subversion because Subversion doesn't store enough information to make merging work. In Mercurial, merging is painless and easy, and so branching is commonplace and harmless.

Then I said, “Fine, I'll use it, but don't expect me to be able to figure it out.” And I asked Jacob to make me a cheat sheet listing all the things that I normally did in Subversion, and the equivalent way to do them in Mercurial.

Now, I could show you this cheat sheet, but I won't, because it messed up my brain for months.

It turns out that if you've been using Subversion, your brain is a little bit, um, how can I say this politely? You're brain damaged. No, that's not polite. You need a little re-education. I walked around brain damaged for six months thinking that Mercurial was more complicated than Subversion, but that was only because I didn't understand how it really worked, and once I did, it turns out—hey presto!—it's really kind of simple.

So I wrote this tutorial for you, in which I have been very careful not to explain things in terms of Subversion, because there is just no reason to cause any more brain damage. The world is brain damaged enough. Instead, for those of you who are coming from Subversion, I've got this one chapter at the beginning that will try to reverse as much damage as possible so that you can learn Mercurial from a clean slate.

If you've never used Subversion, you can skip ahead to the next chapter (Ground Up Mercurial) without missing anything.

Question 1. Do you write perfect code the first time?

If you answered “Yes” to question 1, you're a liar and a cheat. You fail. Take the test again.

New code is buggy. It takes a while to get it working respectably. In the meantime, it can cause trauma for the other developers on the team.

Since all new code that you write has bugs, you have a choice.

As Subversion users, we are so used to this dilemma that it's hard to imagine it not existing.

Subversion team members often go days or weeks without checking anything in. In Subversion teams, newbies are terrified of checking any code in, for fear of breaking the build, or pissing off Mike, the senior developer, or whatever. Mike once got so angry about a checkin that broke the build that he stormed into an intern's cubicle and swept off all the contents of his desk and shouted, “This is your last day!” (It wasn't, but the poor intern practically wet his pants.)

All this fear about checkins means people write code for weeks and weeks without the benefit of version control and then go find someone senior to help them check it in. Why have version control if you can't use it?

Here's a simple illustration of life under Subversion: 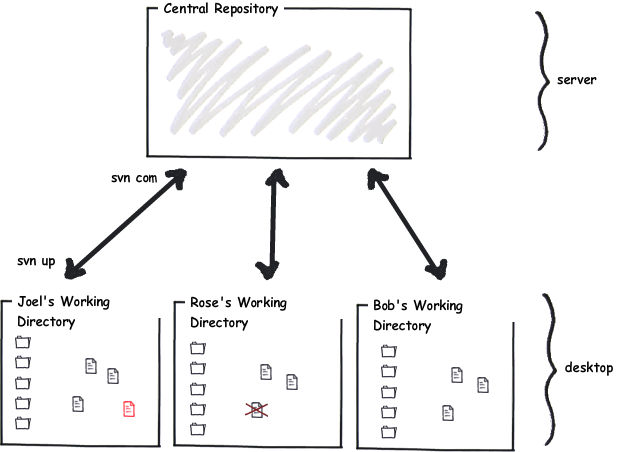 In Mercurial, every developer has their own repository, living on their desktop: 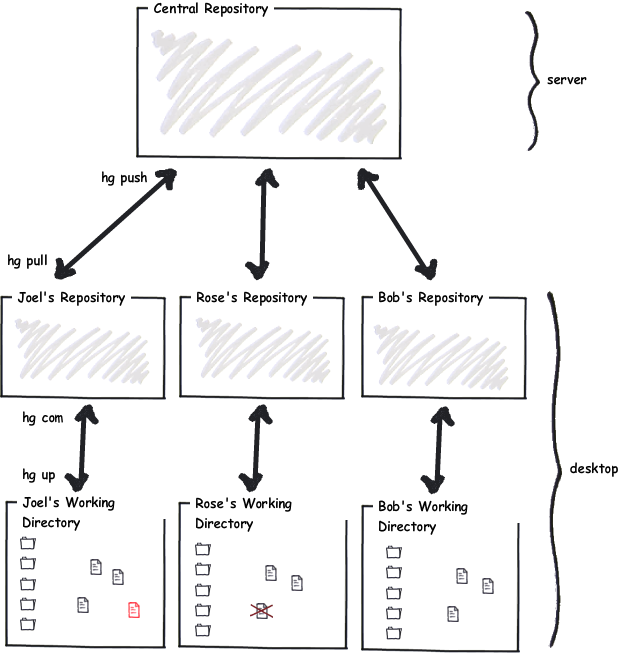 So you can commit your code to your private repository, and get all the benefit of version control, whenever you like. Every time you reach a logical point where your code is a little bit better, you can commit it.

Once it's solid, and you're willing to let other people use your new code, you push your changes from your repository to a central repository that everyone else pulls from, and they finally see your code. When it's ready.

Mercurial separates the act of committing new code from the act of inflicting it on everybody else.

And that means that you can commit (hg com) without anyone else getting your changes. When you've got a bunch of changes that you like that are stable and all is well, you push them (hg push) to the main repository.

You know how every single street has a name? 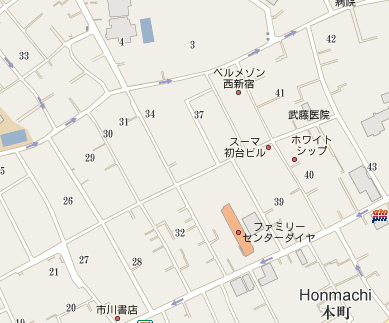 Well, yeah, turns out that in Japan, not so much. They usually just number the blocks in between the streets, and only very, very important streets get names.

There's a similar difference between Subversion and Mercurial.

Subversion likes to think about revisions. A revision is what the entire file system looked like at some particular point in time.

In Mercurial, you think about changesets. A changeset is a concise list of the changes between one revision and the next revision.

Six of one, half dozen of the other: what's the difference?

Here's the difference. Imagine that you and I are working on some code, and we branch that code, and we each go off into our separate workspaces and make lots and lots of changes to that code separately, so they have diverged quite a bit.

When we have to merge, Subversion tries to look at both revisions—my modified code, and your modified code—and it tries to guess how to smash them together in one big unholy mess. It usually fails, producing pages and pages of “merge conflicts” that aren't really conflicts, simply places where Subversion failed to figure out what we did.

By contrast, while we were working separately in Mercurial, Mercurial was busy keeping a series of changesets. And so, when we want to merge our code together, Mercurial actually has a whole lot more information: it knows what each of us changed and can reapply those changes, rather than just looking at the final product and trying to guess how to put it together.

For example, if I change a function a little bit, and then move it somewhere else, Subversion doesn't really remember those steps, so when it comes time to merge, it might think that a new function just showed up out of the blue. Whereas Mercurial will remember those things separately: function changed, function moved, which means that if you also changed that function a little bit, it is much more likely that Mercurial will successfully merge our changes.

Since Mercurial thinks of everything in terms of changesets, you get to do interesting things with those changesets. You can push them to a friend on the team to try them out, instead of pushing them to the central repository and inflicting them on everybody.

If this all seems a bit confusing, don't worry—by the time you get through this tutorial, it'll all make perfect sense. For now the most important thing to know is that because Mercurial thinks in terms of “changesets” instead of “revisions” it can merge code much better than Subversion.

And that means that you can feel free to branch because the merge isn't going to be a nightmare.

Want to know something funny? Almost every Subversion team I've spoken to has told me some variation on the very same story. This story is so common I should just name it “Subversion Story #1.” The story is this: at some point, they tried to branch their code, usually so that the shipping version which they gave their customers can be branched off separately from the version that the developers are playing with. And every team has told me that when they tried this, it worked fine, until they had to merge, and then it was a nightmare. What should have been a five minute process ended up with six programmers around a single computer working for two weeks trying to manually reapply every single bug fix from the stable build back into the development build.

And almost every Subversion team told me that they vowed “never again,” and they swore off branches. And now what they do is this: each new feature is in a big #ifdef block. So they can work in one single trunk, while customers never see the new code until it's debugged, and frankly, that's ridiculous.

Keeping stable and dev code separate is precisely what source code control is supposed to let you do.

When you switch to Mercurial, you may not even realize it, but branching becomes possible again, and you don't have to be afraid.

That means you can have team repositories, where a small team of programmers collaborates on a new feature, and when they're done, they merge it into the main development repository, and it works!

The last major conceptual difference between Subversion and Mercurial is not as big a deal, but it will trip you up if you're not aware of it, and here it is:

The main way you notice this is that in Subversion, if you go into a subdirectory and commit your changes, it only commits changes in that subdirectory and all directories below it, which potentially means you've forgotten to check something in that lives in some other subdirectory which also changed. Whereas, in Mercurial, all commands always apply to the entire tree. If your code is in c:\code, when you issue the hg commit command, you can be in c:\code or in any subdirectory and it has the same effect.

This is not a big deal, but if you're used to having one big gigantic repository for the whole company, where some people only check out and work on subdirectories that they care about, this isn't a very good way to work with Mercurial—you're better off having lots of smaller repositories for each project.

Here's the part where you're just going to have to take my word for it.

Mercurial is better than Subversion.

It is just better.

And in the early days, you will be tempted, I know you will, to give up on Mercurial and go back to Subversion, because it will be strange, like living in a foreign country, and you'll be homesick, and you will come up with all kinds of rationalizations, like, for example, you will claim that Mercurial working directories take up too much disk space, which is bologna, because, actually, they usually take up less space than Subversion directories. (It's true!)

And then you'll get Jacob, or whoever the equivalent of Jacob is at your office, to give you the “Subversion to Mercurial cheat sheet,” and you'll spend three months thinking that hg fetch is just like svn up, without really knowing what hg fetch does, and one day, things will go wrong and you'll blame Mercurial, when you really should be blaming yourself for not understanding how Mercurial works.

I know you'll do that because that is what I did.

Don't make the same mistake. Learn Mercurial, trust Mercurial, and figure out how to do things the Mercurial way, and you will move an entire generation ahead in source code control. While your competitors are busy taking a week to resolve all the merge conflicts they got when a vendor updated a library, you're going to type hg merge and say to yourself, “Oh gosh, that's cool, it just worked.” And Mike will chill out and share a doobie with the interns, and soon it will be spring and the kids at the nearby college will trade in their heavy parkas for skimpy A&F pre-torn T-shirts, and life will be good.